Making and baking inscriptions – and the CREWSmas party!

Term-time has recently finished here, and the CREWS project team has been taking part in some rather jolly end-of-term activities.

The first was the final session of the ‘Linear A self-help group’, a series of seminars we have been running where a number of colleagues working on Linear A or related scripts have been presenting their work and discussing their ideas. For the final meeting, we decided to have a practical session, and to try making our own inscriptions using modelling clay. You also can read about it on our colleague Anna Judson’s blog HERE.

What are Linear A and Linear B?

Linear A was used around the 19th-15th centuries BC, in Crete and some of the islands, to write an unknown language that we label ‘Minoan’ (we know the values of many signs, but still do not understand the language).

Linear B was used around the 15th-13th centuries BC, in Crete and on the Greek mainland, to write an early form of Greek.

Why bother trying to make our own inscriptions? Well, actually there are still a lot of unanswered questions about the production of clay tablets in the ancient Aegean. How did the scribes achieve such detail in the more complex signs? What did they use to write with? How did they create the flat surface for writing on? Why are Linear B ‘palmleaf’ tablets (i.e. small elongated ones that can be held in the palm of the hand) curved on the back but flat on the top? We started off the session with an illuminating presentation by PhD student Ester Salgarella on some of these problems, and then we set about trying to answer some of them through a practical attempt at making our own tablets. 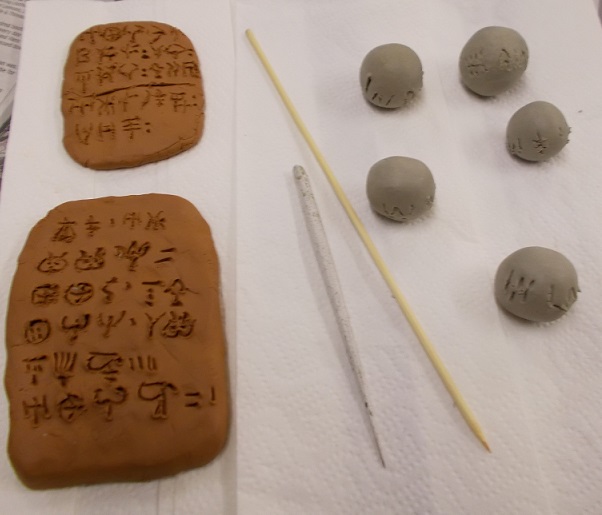 One thing we discovered was that it isn’t easy to make very detailed small signs unless you have a very sharp and pointed object. Picking up on a suggestion made a while ago by Professor John Killen, our colleague Dr Sarah Finlayson had brought along some thorns for us to try. These proved much better than the improvised bamboo skewers we started with. The picture above shows the inscriptions I made, with an acacia thorn (courtesy of Sarah, middle left) and a bamboo skewer (courtesy of our seminar leader Dr Torsten Meissner, middle right).

Using the bamboo skewer I started with, I had a go at replicating a Linear A tablet, HT 86 (which is our way of saying that it is tablet no. 86 from the site of Haghia Triada, where an important set of Linear A archives were found): see the picture below where it is next to a photo of the real thing. I’m not sure I did very well but trying to replicate a tablet told me a lot about trying to make the signs look right and fit into the space left for them. You can probably tell from the photo that the real thing was inscribed with something much sharper than my bamboo skewer.

I was also keen to try making a type of inscription found in Late Bronze Age Cyprus, where another related writing system was used (‘Cypro-Minoan’): the clay ball. Despite years of work on Cypriot inscriptions, I am still not at all sure what these items were used for, but they are absolutely characteristic of Cypriot epigraphy in this period (especially the 14th-12th centuries BC). I’ve written about them HERE.

The little clay balls are on average about 2cm in diameter and have signs written around the outside (see below). I always thought it would be hard to add the inscription without squashing the ball, but when I tried it I found this wasn’t much of a problem (although the top and bottom can get a bit flattened). The really hard thing is to add the inscription in a straight line around the ball without sloping downwards as you go. It took me a couple of tries to get this right! 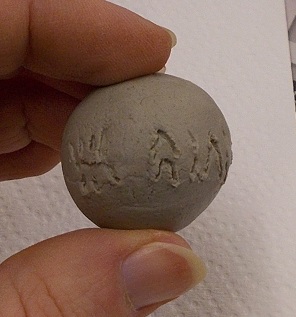 Meanwhile Natalia (CREWS project PhD student) tried her hand at some different inscriptions including a Cretan Hieroglyphic label (pictured below), a Linear A tablet and a clay ball.

And Philip (CREWS project research associate) made an exceptionally chocolatey Linear A inscription cake – I am told that writing Linear A is even harder to do with icing! Around the edge at the top you can also see some biscuits he made in the form of a common Minoan symbol, the ‘horns of consecration’. 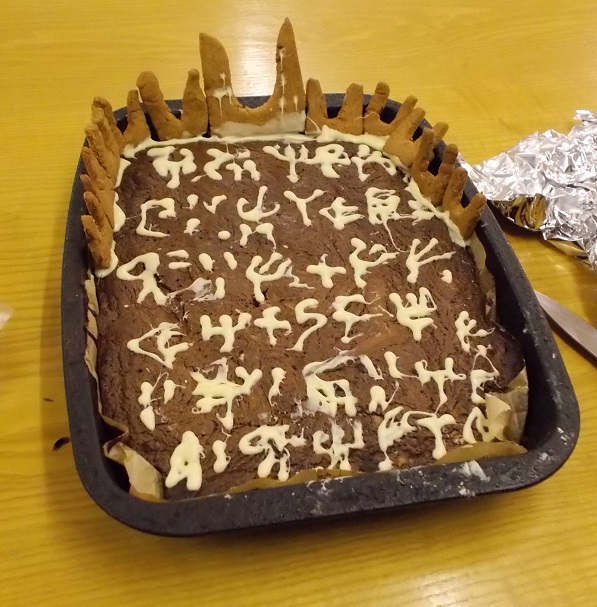 Philip has also blogged about the clay inscriptions he made HERE.

So our practical session was an excellent way to round off the Linear A seminar series – you can’t try to understand ancient writing without trying to understand what issues ancient writers were facing when they wrote!

The next day it was then time for our end-of-term party, dubbed the CREWSmas party, which gave us a lovely chance to talk to colleagues about the project’s progress over a drink… and of course over some writing-themed snacks. Philip had been busy again and made many inscription cookies, which were much admired by all the party-goers. Here’s a selection before firing (I mean baking!):

As you may be able to tell, there are several different writing systems represented among these cookies, including Ugaritic cuneiform, Linear A and B and the Phoenician and Greek alphabets. Here’s another picture of the batch fresh out of the oven:

I am not much of a baker myself, but I did do some cake inscribing. Taking some pre-iced mince pies, I added single-sign marks. They’re based on single-sign marks found at the sites of Eretria and Methone, where some of the earliest surviving Greek alphabetic inscriptions have also been found. Natalia has been studying them lately as part of her PhD research – some look like alphabetic letters, while others do not, which makes it very hard to understand what they are supposed to represent although they seem to be some sort of reflex of writing. 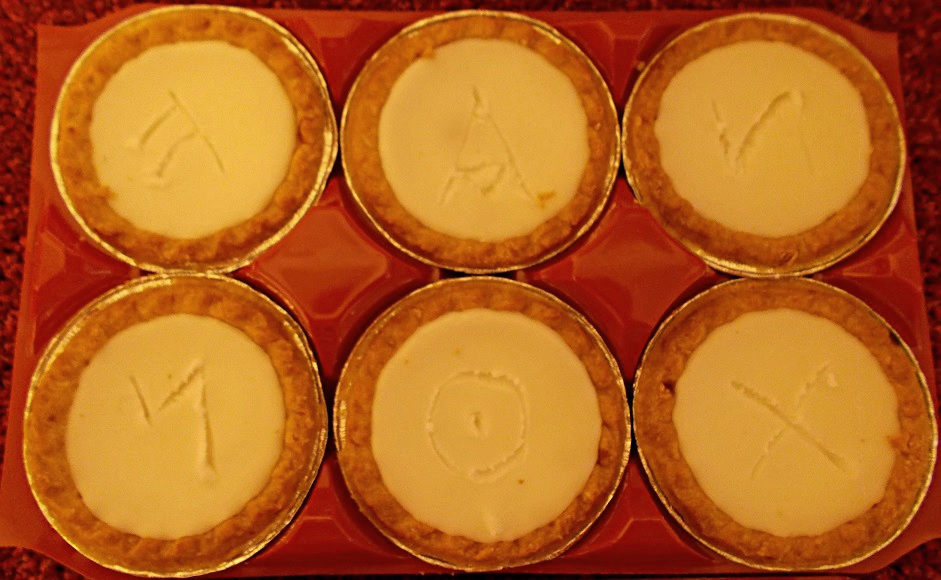 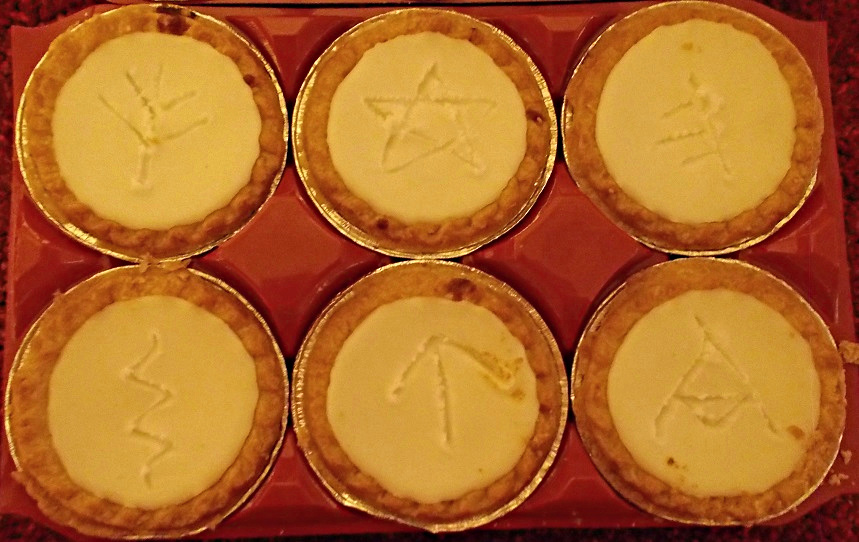 I hope you’ve enjoyed having a look at our creations, both edible and inedible. Don’t forget (have I mentioned this before?) that having a go at baking your own inscriptions or even inscribing some pre-bought cakes is really easy – and if you have a go at it we would love to hear from you! As always you can find us on Twitter (@crewsproject) or send us an email at crews@classics.cam.ac.uk.

2 thoughts on “Making and baking inscriptions – and the CREWSmas party!”