I’m doing a charity walk to celebrate the 1,900th anniversary of Hadrian’s Wall, so during September I’ll be trying to walk 84 miles – the length of the Wall – but without actually visiting (which also nicely avoids treading on all that archaeology). So what better excuse for a post on writing and literacy in this northern outpost of the Roman world?

First a note on my charity walk, and then on to the inscriptions! This is quite special to me because I grew up visiting Hadrian’s Wall frequently but haven’t been back since 2011 (how is that over ten years ago?!). So I’ve got my pedometer and I’ve measured my steps so that I can tell how far I’ve gotten each day, and even if it’s a challenge (because of some ongoing medical issues and not getting much of a chance to go walking) I’m determined to keep going. Partly that’s because I’m doing it for a charity I really believe in, Classics For All, who aim to bring teaching on the ancient world to a much wider proportion of schoolchildren than currently have access to it. You can find out more by clicking below, and if you feel inclined to donate I know it will be much appreciated by me and by all the amazing people working for Classics For All.

END_OF_DOCUMENT_TOKEN_TO_BE_REPLACED

Hello, I am Claudia Posani and I am very glad to write an article for the CREWS blog. I am interested in Hittitology, with a particular focus on Syro-Anatolian Iron Age history and on hieroglyphic Luwian inscriptions.

I spent two months as a Visiting Fellow with the CREWS project. During May and June 2022, I worked on multilingual inscriptions of the so-called Neo-Hittite states (around 11th-8th centuries BC). These inscriptions include bilingual and also trilingual texts written on different supports, such as statues, steles and orthostats. They belong to the textual category of “royal inscriptions”, namely they express the voice of kings or rulers who speak in first person in the texts narrating their enterprises.

The main feature of these documents consists of offering the same text written in two or more languages. The texts I was dealing with were written in Hieroglyphic Luwian, Phoenician, Aramaic and Assyrian. These different languages (Luwian belonging to the Indo-European, the other to the Semitic language family) were written adopting different writing systems. Consequently, we can read on the same support the same text written in hieroglyphic script, cuneiform characters and alphabetic signs.

Multilingualism in Syro-Anatolian states is certainly connected to the historical background of these polities, which were strongly characterised by mutual contacts and cultural hybridity. Nevertheless, one point captured my interest: could textual multilingualism/multiscriptalism be connected to royal propaganda and to the intention of presenting a specific image of the king?

END_OF_DOCUMENT_TOKEN_TO_BE_REPLACED

In the Bronze Age, two incompatible alphabetic writing systems developed independently in Canaan—to the North, Ugarit’s alphabet had an interface derived from syllabic cuneiform and, to the South, miners in the Sinai used a hieroglyphic ideogram interface. From the outset, both of these regional scripts relied upon omission, where readers had to fill in gaps by supplying missing vowels. Also from the outset, both symbolic systems used individual graphemes to represent individual consonants. Both systems had their strengths, similar to the communications format war of the 1980s between Sony (Betamax) and JVC (VHS). If that reference seems obscure, you might compare these parallel but incompatible alphabetic technologies to the choice of Blu-ray versus HD-DVD, or Chrome versus Safari—although both performed well, only one format thrived. The cuneiform version had the benefit of deriving from a common international cuneiform system, using common clay scribal media and tools, and having the advantage of disambiguating three specific vowel combinations with the consonant ˀalp (ˀa, ˀi, ˀu). This Ugaritic version would play the part of Betamax in our analogy, a version with a bit more precision but perhaps not as accessible.

END_OF_DOCUMENT_TOKEN_TO_BE_REPLACED

Hi there! I am Lavinia Giorgi, a PhD student in Mycenaean philology at Sapienza University of Rome (Italy). My PhD research deals with the management and circulation of bronze in the Mycenaean world focusing on the reconstruction of the bronze production chain mainly through the analysis of the Linear B tablets, but also taking into account the Hittite and Ugaritic texts and the el-Amarna letters and combining philological data with archaeological evidence.

In the meantime, I am collaborating with THE PAITO/PHAISTOS EPIGRAPHIC PROJECT, which aims to provide a new critical edition of the Linear B tablets of Knossos mentioning pa-i-to, Phaistos, a place located in southern Crete, adopting the digital photography technologies of RTI (Reflectance Transformation Imaging) and 3D Laser Scanning.

The research I did in Cambridge as a visiting fellow within the CREWS project is part of THE PAITO/PHAISTOS EPIGRAPHIC PROJECT because it focused on the word pa-i-ti-ja, the ethnic feminine adjective derived from pa-i-to.

The word is attested in 9 tablets, covering several topics, dating from different periods (15th-13th century BC) and were written by different scribes. In particular, two of these tablets, KN Ap 639 and KN E 777, are kept at Ashmolean Museum, so, thanks to my stay in Cambridge I was also able to directly access them and take RTI photographs of both.

END_OF_DOCUMENT_TOKEN_TO_BE_REPLACED

Happy International Lego Classicism Day to all our friends and colleagues! In celebration this year, I have been working on something special: a re-imagining of the cover art from John Chadwick’s The Mycenaean World book, in a 3D Lego model. Far from a just-for-fun exercise, this actually has some helpful practical applications in making us question what Mycenaean scribes did at work, and how Linear B archives functioned.

END_OF_DOCUMENT_TOKEN_TO_BE_REPLACED

My research has taken a fun turn towards practical experiments lately, as some of our Twitter followers may have noticed. It isn’t just because I wanted to get away from the computer (though I did…); it’s because I have been working on a problem where direct evidence is scarce and/or difficult to interpret, and where experimentation is surprisingly elucidating.

We know that during the Bronze Age a number of civilisations around the eastern Mediterranean were using clay to write on. From Mesopotamian cuneiform to Linear A and B in the Aegean, people found that this reusable natural resource provided a vital tool for making records. But they didn’t all use it in the same way, and they didn’t all use the same implements or methods to write on it – instead traditions of writing display considerable regional differences, whether or not there might have been any influences from one place to another. END_OF_DOCUMENT_TOKEN_TO_BE_REPLACED

We’ve talked a lot on this blog about how important it is to think about ancient writing in its physical capacity – as part of an object – not just as text. This is why we’re so keen on trying out ancient writing techniques for ourselves. But it’s not just making new things; it’s looking at real ancient tablets with an eye for their material characteristics and the practical techniques used to make them.

Last week I was lucky enough to visit the British Museum for a hands-on study session with some of the most famous tablets of the Near Eastern Bronze Age – the Amarna Letters. 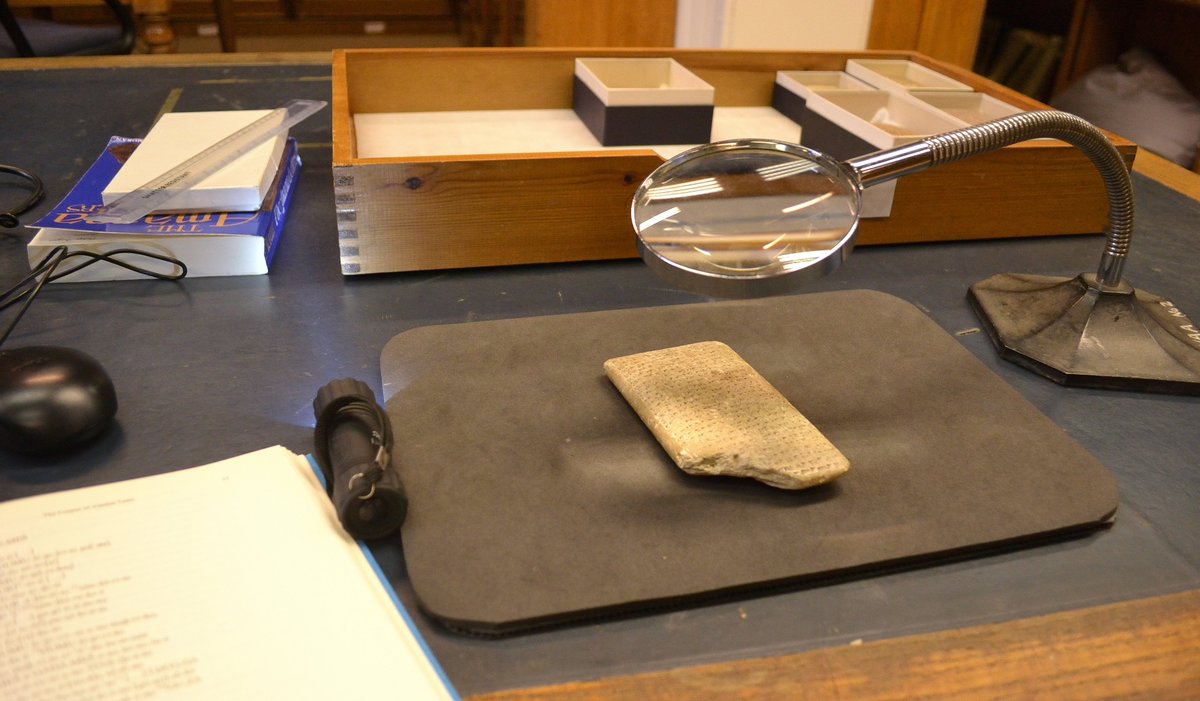