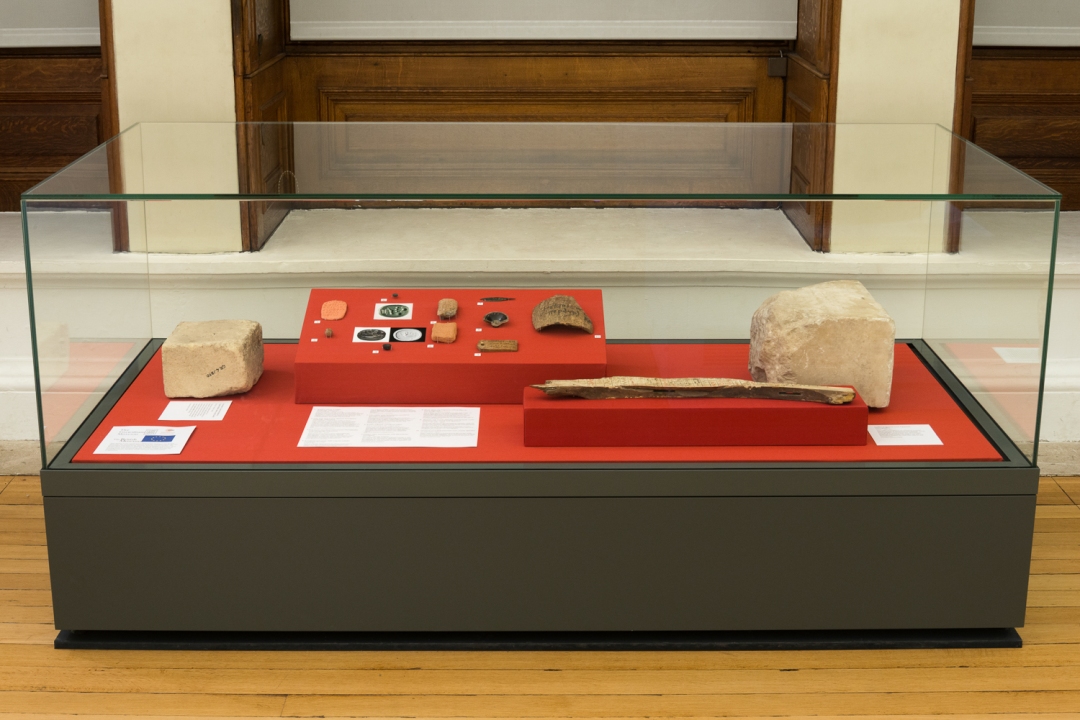 In 2018 we were lucky enough to be involved in co-curating a display on ancient writing at the Fitzwilliam Museum, Cambridge. This was organised by our colleague at the Fitzwilliam, Dr Anastasia Christophilopoulou, in collaboration also with Dr Thomas Kiely at the British Museum. The display brought together a number of items from the collections of the Fitzwilliam and British Museum to tell the story – or stories – of the development of writing in the ancient eastern Mediterranean.

The display was ‘live’ between January and June 2018, so sadly it is no longer possible to see it in person, and the objects have been returned to their former homes and cabinets. But I hope this post will give you a chance to visit the exhibition virtually!

Below you will find a short description of each item as you follow our virtual tour. Then CLICK on the name of the item to read about it in much more detail.

The star of the show was the Idalion Bilingual, a 4th C BC stone inscription from Cyprus that was used to decipher the Cypriot Syllabic writing system. Setting two languages (Phoenician and Cypriot Greek) and their respective writing systems side-by-side, this famous piece set up some of the display’s themes.

During the first millennium BC, when many communities around the Mediterranean used alphabetic systems, Cyprus stood out because of its different writing habits. Speakers of Greek and Eteocypriot in Cyprus used a syllabic writing system that had its roots in Bronze Age Crete.

The earliest well-known writing system of Bronze Age Crete is known as Cretan Hieroglyphic, and could be seen – provided you look very closely – in a tiny Cretan Hieroglyphic seal stone of the 19th-17th C BC, made of green jasper (above).

Closely related to this script is another one attested about the same time, known as Linear A, and our display also featured a replica Linear A tablet made by Pippa Steele in a practical writing experiment. The original on which it was based dates to the 15th C BC. These writing systems are undeciphered but we know quite a lot about the contexts in which they were used.

Now Cyprus came into contact with the Aegean during the Bronze Age, and Cypriots borrowed the Linear A writing system to develop their own script, known by us as Cypro-Minoan. Rather than copying Cretan traditions of writing, however, Cypriots developed distinctive document types of their own, like this Cypro-Minoan clay ball from the 13th-12th C BC. Distinctive traits in Cypriot writing were to last for over a thousand years.

Two other objects in the display continued this theme by showing Cypriot writing of the first millennium BC: a tombstone of a man named Paramenon(5th-45h C BC), and a seal of a woman named Philoi (7th-6th C BC). The seal is especially interesting because of its iconography, showing a fish-man of Near Eastern style. 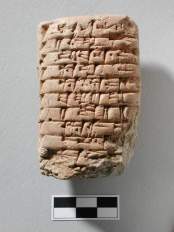 The Near East plays a crucial role in the development of writing, as an area where some of the earliest known writing in the world is found, specifically in Mesopotamia. Growing from a pictographic tradition, wedge-shaped cuneiform writing became characteristic of the Near East and was commonly written on objects like this Babylonian clay tabletof the 18th C BC. This type of cuneiform was largely syllabic but also used logograms.

The site of Ugarit on the Levantine coast represents another phase of cuneiform writing, with a new script that was cuneiform in appearance but had a completely different structure: the Ugaritic alphabet. Philip Boyes’ replica Ugaritic tablet showed this unique writing adaptation, which seems to have been a new and short-lived development of the 13th C BC. 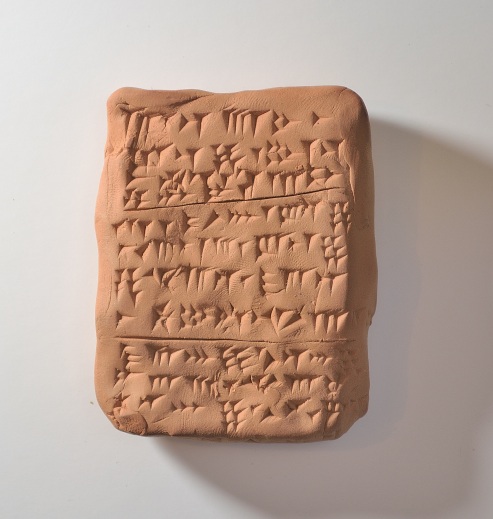 Egypt also plays a crucial role in the development and spread of writing – and in some unexpected ways. The famous Egyptian Hieroglyphic script first appeared around the same time as cuneiform in Mesopotamia, but is very different in appearance and often incorporated into artistic spaces and decorations. This coffin fragment with Egyptian Hieroglyphic writing (21st-20th C BC) is typical of its appearance when painted colourfully on a material like wood.

One later development in Egyptian writing was the Demotic script, which was used for Egyptian language and appears here in a bilingual mummy label, in Egyptian Demotic and alphabetic Greek (dated some time between 1st C BC and 3rd C AD).

Speakers of a Semitic language also seem to have taken inspiration from Egyptian Hieroglyphic writing in the creation of a new system that was to develop into the better attested consontantal alphabets of the Levant in the second and first millennia BC. One of the best known is perhaps Phoenician, which was used in the area around Syria and Lebanon, and is also closely related to Hebrew and Aramaic scripts.

This Phoenician inscribed arrowhead (left) is an example of quite an early stage of standardisation of Phoenician writing, dating probably from the 11th C BC. Phoenician also appears in Cyprus from about 9th C BC onwards, which is how it came to be one of the languages/scripts involved in the Idalion Bilingual mentioned above.

In turn, Greek speakers borrowed the Phoenician consonantal alphabet, and by adding vowel signs and making some changes the Greek alphabet developed. It is closely related also to the alphabetic scripts appearing in other areas of the Mediterranean in the earlier 1st millennium BC, like Italy and Phrygia.

A 5th C BC cup sherd with an alphabetic Greek inscription mentioning Aphrodite (left) shows what Greek alphabetic writing looked like – quite close to modern Roman-based alphabets, and not very much like the Egyptian Hieroglyphs that were a distant ancestor. This sherd was in fact found at Naucratis in Egypt.

Another object from Egypt with Greek writing can be seen in this ostracon in cursive Greek alphabet recording pistachios (below), dating to 6th C AD. The alphabet is essentially the same as in the Aphrodite sherd, but has become more curved and flowing.

Returning to Cyprus, which seems fitting for our final item, we can see another Greek alphabetic inscription on a clay statuette of the 3rd C BC (right). Although Cyprus had long been home to distinctive writing habits, it eventually adopted the alphabet that was popular among Greek speakers all around the Mediterranean.

There are many stories of writing, because writing was a phenomenon that was created, developed, shared and adapted over and over as people came into contact with each other and made writing suit their own linguistic and social and cultural needs. Writing is a story of movement, contact and change, and we hope this display has helped to represent a few small chapters of that story in one area of the world, the eastern Mediterranean.

If you have read this far, please leave us a comment – just as you might in a museum! Did you enjoy the ‘tour’? What was your favourite object? Is there anything else you would like to say to us? This feedback is very helpful to us so we very much appreciate any and all comments.

If you are interested, you can also read about the setting up of the display, as well as the day when it was taken down. The full set of blog posts about the display can be found by clicking here.