In Ancient Greece people would write on almost any kind of object. For example, votes to send a politician to exile for 10 years were written on pottery sherds! This practice of the Athenian democracy was called ostracism because the name for “sherds” in Ancient Greek is ὄστρακα (ostraka). 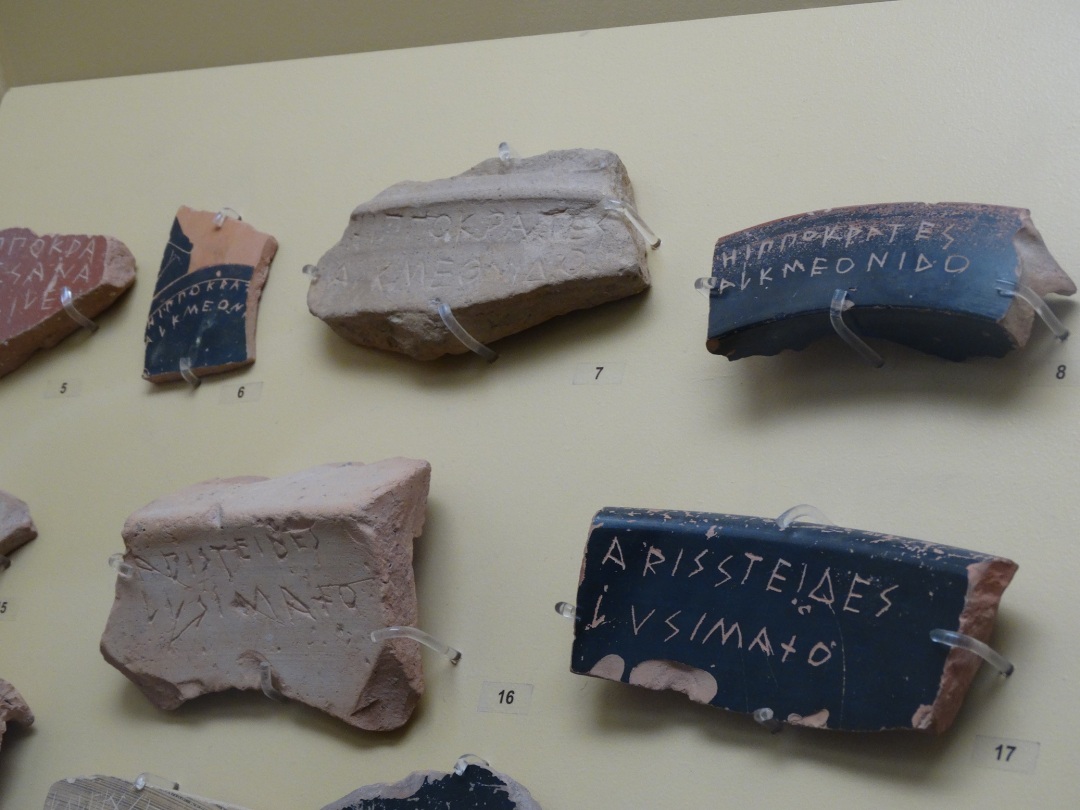 Fragments of ceramic with votes for ostracism. Picture taken by the author: Agora Museum, Athens.

END_OF_DOCUMENT_TOKEN_TO_BE_REPLACED

We’re well into December and the postal services are enjoying their busiest time of the year as parcels and cards fly backwards and forwards. What better time to share this little gem I came across during my research.

That’s a 1956 postage stamp from Syria featuring the Ugaritic abecedarium KTU 5.6, well-known to regular readers of this blog. I was curious about it, and a few minutes’ research showed that this wasn’t the only Ugarit-themed stamp Syria has issued. 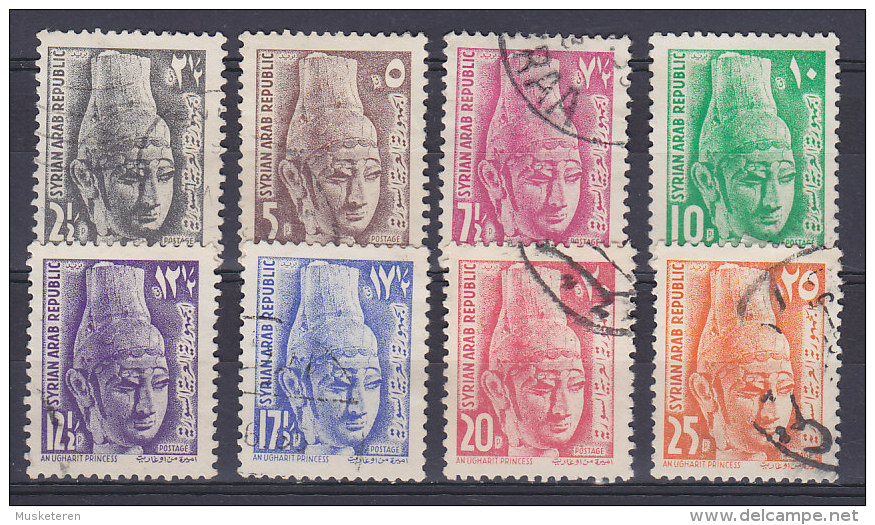 This one from 1964 isn’t writing-based, but features this famous sculpture of a head, made of ivory and adorned with gold, silver, copper and lapis lazuli. It’s usually assumed to be a statue of a prince or princess, since it was found in the city’s Royal Palace. 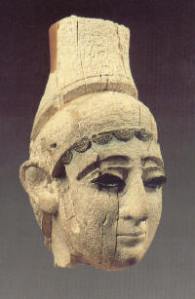 This got me wondering what other countries have featured ancient writing-systems on their stamps. Here are some of the ones I found: END_OF_DOCUMENT_TOKEN_TO_BE_REPLACED

Hello! I’m Philip Boyes and I’m absolutely delighted to be joining the CREWS Project as a Research Associate from November 2016. I’m going to be looking at the Ugaritic writing system, its emergence and its context of use. Ugaritic is a fascinating Late Bronze Age adaptation of the existing cuneiform writing systems used across the Near East. Instead of each sign representing a syllable, as had traditionally been the case, Ugaritic is an alphabetic system (though one where only consonants are represented and not vowels) and was used to represent the local language of the city of Ugarit.

An abecedarium from Ugarit.

At the heart of my approach is the idea that we should explore changes in writing systems like this as we would any other example of social change – and that means getting to grips with the social context in as much detail we can, looking at how the creation and use of the Ugaritic script is linked to every aspect of society and culture, from politics and the economy to social status, gender and other forms of social identity. The only way to do this is to draw on every kind of evidence that’s available to us – not just the texts found at Ugarit, but also the archaeological evidence, iconographic representations, historical documents and more.. 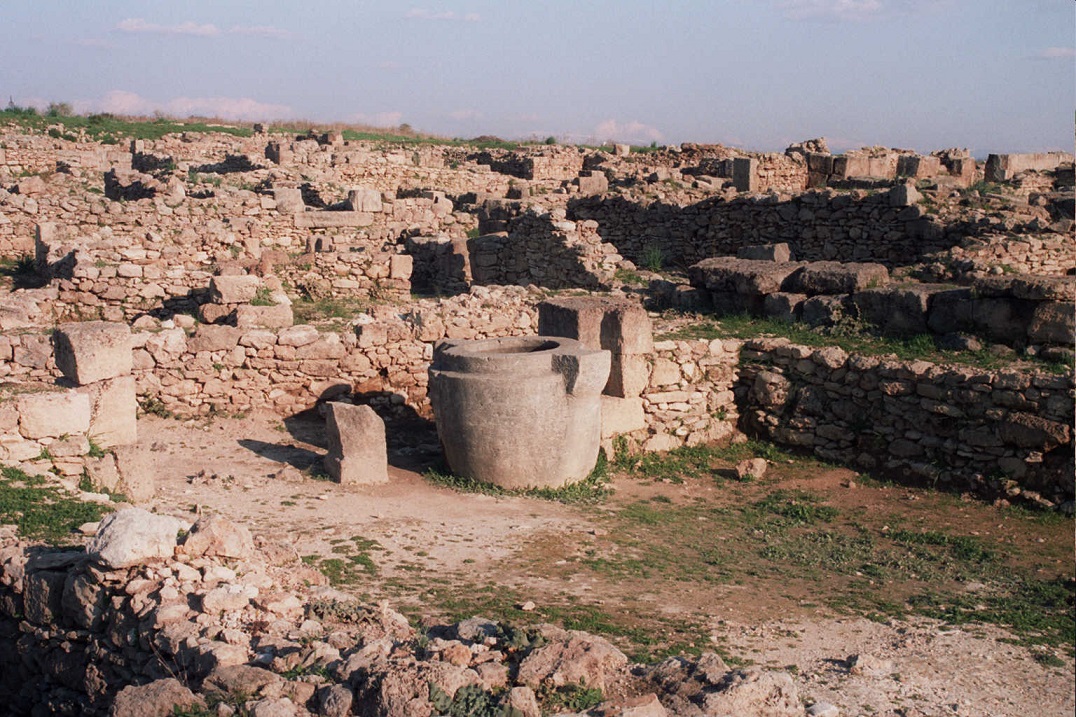 This bringing-together of different kinds of evidence is for me one of the most exciting aspects of the CREWS Project. In my more recent academic career I’ve mainly been an archaeologist and ancient historian: my PhD research was on social change in Phoenicia (the coastal region south of Ugarit, roughly equivalent to modern Lebanon) and I’ve been lucky enough to excavate at the Hittite site of Kilise Tepe in Turkey and at the Phoenician African colony of Carthage, as well as a spell as a commercial archaeologist based in Salisbury (you can spot me in a couple of episodes of Time Team!). Before that, though, my background was in Aegean prehistory, Linear B epigraphy and comparative linguistics, and I’ve maintained my interest in linguistics and writing systems even when they haven’t been my main research topics. Archaeology and linguistics aren’t studied together all that often and I’ve always been extremely interested in how they can shed light on each other and improve our understanding of both. I’m really looking forward to being able to bring together these different strands of my career on this project.

I’ll be writing again soon, once I’ve started my research. In the meantime, if you’d like more from me, I’ve blogged for Res Gerendae on things as diverse as lettuce in Sumerian love poetry, Greek and Roman sea monsters, and Classics in Doctor Who. My own blog, which will cover similar things that don’t fall directly within the scope of the CREWS Project, is Ancient Worlds.

~ Philip Boyes (soon to be Research Associate on the CREWS project)

Finally the time has come for the exciting project news that I have been waiting to tell you all about! I am delighted to announce that the CREWS project is welcoming two new team members.

Dr Philip Boyes will be joining the team on 1st November as a Research Associate, and will work on the social context of writing at the Late Bronze Age city of Ugarit. Coming from a background of Levantine history and archaeology, the project will benefit greatly from his interdisciplinary approach to developments in writing and their relationship with other sorts of social change.

Natalia Elvira Astoreca just joined the team a few days ago as the project’s PhD student, and is going to be working on the early development of the Greek alphabet. With previous experience of research on Cypriot writing and Greek epigraphy, she is going to consider questions such as why and how the early Greek alphabet displayed such a high degree of regional diversity, and how it was related to other alphabetic systems.

We will be back soon with more posts about writing in the ancient world, including one from Philip introducing his research. Fun times are ahead for the CREWS project!

For this post I wanted to focus on just one inscription, and say a little about how it plays into some of the themes I have been highlighting in previous posts – especially how its social context helps us to understand it as an object.

The inscription is on a ceramic vessel in the shape of a cockerel, made from a black glazed ware known as bucchero. This type of pottery is typical of ancient Etruria, an area of Italy to the north of Rome where the now little-understood language Etruscan was spoken. Incised around the body of the vessel is an abecedarium, listing the signs of the alphabet in A,B,C order.

Bucchero vessel in the shape of a cockerel. The Metropolitan Museum of Art, Fletcher Fund, 1924. http://www.metmuseum.org/art/collection/search/251482.

END_OF_DOCUMENT_TOKEN_TO_BE_REPLACED

I have been promising for a while to say something about the Venetic goddess of writing. Last term, my colleague Dr Katherine McDonald gave a short seminar series on the Venetic language, which was used in the Veneto area of Italy in the second half of the 1st millennium BC (at least, this is when most of the evidence for it dates from).

The Venetic language has clear affiliations with other Italic languages, which can be seen for example in some words that look very similar to what we find in Latin (such as ego for the first person pronoun “I”). It was written in an alphabet that seems to have been derived from an Etruscan alphabet (itself derived from the Greek alphabet), although it has some peculiarities of its own, including a complex system of punctuation for syllables.

You can see what the Venetic alphabet looks like in the ‘inscription’ shown in Figure 1 – which is not in fact the original inscription but a delicious cake version of it baked by my colleague Dr Anna Judson for the seminar! 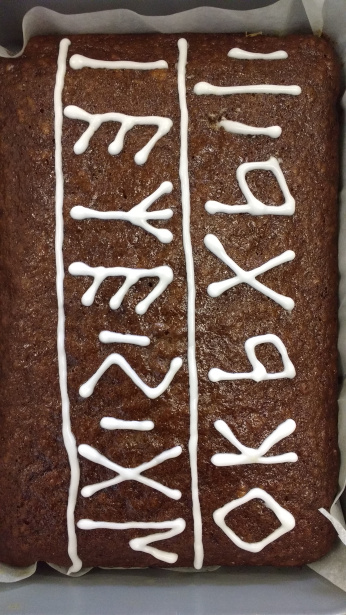 END_OF_DOCUMENT_TOKEN_TO_BE_REPLACED

A couple of months ago a major epigraphic discovery was announced: a number of wooden writing tablets, dated to the 1st century AD, had been found in an excavation in London. This was a considerable archive, with 405 tablets of which 87 have been analysed and translated by Dr Roger Tomlin of Oxford. A picture of one is shown in Figure 1 below. 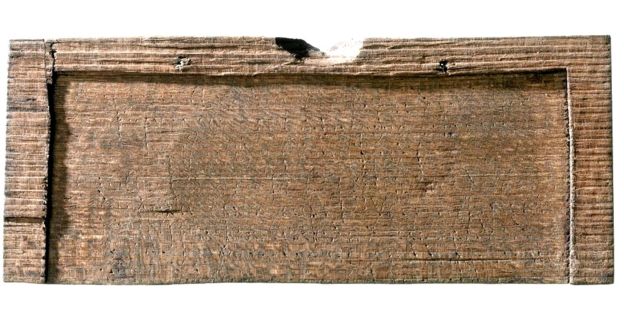 Why should we get excited about this find? Well, for one thing these objects allow us a rare chance to observe Roman handwriting. We have plenty of surviving Latin but the vast majority has come through one of two routes: either through being copied down over and over again since ancient times (which is why a lot of our earliest copies of Classical authors date from the medieval period) or through being written on a durable medium such as stone or pottery that has survived to be read today. Neither of these gives us access to what Latin looked like when it was written down by hand directly by an ancient Latin speaker him/herself.

One of the reasons why Roman handwriting is hard to find has to do with the materials that were usually written on. One place to look for handwriting is in graffiti, such as have been found on the walls of Pompeii – a favourite example of mine is shown as a drawing in Figure 2 (labyrinthus hic habitat Minotaurus written around a depiction of a labyrinth). But graffiti on walls are rare and you are much more likely to find a scrawled graffito on a sherd of pottery than on a wall, with Pompeii representing an unusual chance to observe mural graffiti.

END_OF_DOCUMENT_TOKEN_TO_BE_REPLACED

On Wednesday 13th July, the CREWS project hosted its first academic event, a seminar presented by Dr Christian Prager of the University of Bonn. The topic was “Of Codes and Kings: Digital Approaches in Classic Maya Epigraphic Studies”, and gave our speaker the opportunity to tell us all about the digital database of Mayan inscriptions that he is helping to build.

END_OF_DOCUMENT_TOKEN_TO_BE_REPLACED

I am pleased to announce that the job advert for the first Research Associate on the CREWS project has gone live today. See here on the Faculty of Classics website:

The successful applicant will conduct research on a pre-determined aspect of the project, namely the context of writing in ancient Ugarit, specifically the social and cultural background against which the innovation of a new writing system took place. S/he will also conduct comparative studies, comparing the context of Ugarit with that of other examples of contemporary or near-contemporary written culture (for example in the Near East, Anatolia, Cyprus, the Aegean, Egypt); the choice of comparanda may depend in part on previous research experience. S/he will take up the post on 1st October 2016 or as soon as possible thereafter, and will work on the project for four years.

For more information, you may visit the link above or click HERE to visit the University’s job listing.