What’s in a name? Samuel Pepys and the problems of decipherment

Last week I had the pleasure of going on a tour around the Pepys Library at Cambridge’s Magdalene College, where the book collection of famous 17th century diarist Samuel Pepys is kept – including his famous diary itself. Pepys wrote his diary in a sort of code, which got me thinking about how we decipher coded texts, a problem closely related to working with undeciphered ancient writing systems.

The bookplate Samuel Pepys carefully pasted into the books in his collection. By permission of the Pepys Library, Magdalene College, Cambridge.

The tour was with a group of Classics students, viewing a temporary exhibition held in the Pepys Library, Metamorphosis: Ovid at Magdalene. The exhibition involved books from the 15th century onwards, including some early printed versions of Ovid’s works, valuable pieces that demonstrate the ways in which more modern printers and readers have engaged with this popular Roman writer over the centuries. Our host Dr Jane Hughes (the Pepys Librarian at Magdalene) began with a fascinating talk about Pepys and the history of his book collection before moving on the Ovid material, which meant the whole experience was packed with delightful discoveries, from a handwritten Wycliffe Bible to Newton’s Principia Mathematica and Hooke’s Micrographia. I learnt all sorts of things about the history of printing too, but sadly there is not space here to share all these gems.

Now, returning to our main theme, what has Samuel Pepys got to do with deciphering ancient writing systems? Well, a writing system is very much like a code – language is encoded in a series of written signs, and you need to know the code in order to get access to the information or message. You are only able to understand this blog post because you are familiar with the code I am using to write it, a modern alphabet whose individual signs (letters) are well known to you.

Pepys could very well have written his diary in this alphabet too, but instead he deliberately used a sort of code: a shorthand system devised by Thomas Shelton, known as Shelton’s Tachygraphy (which means “fast writing” in Greek). Using this system may have been intended as a way of writing quickly (and this was at the time quite a well used form of shorthand), but it also has the effect of limiting your readership because the code itself requires special knowledge.

By the early 19th century, Shelton’s Tachygraphy was no longer in common use, which meant that Pepys’ diary had effectively become unreadable 100 years after his death, at which time a student at Magdalene College named John Smith was engaged to make sense of the diary. Smith laboured over the manuscripts and managed to decipher the shorthand system. But he eventually realised that the key to the code, a copy of the textbook in which Shelton’s Tachygraphy is outlined, had been right under his nose all along! Apparently disgruntled at having worked so hard on the decipherment needlessly, he made a point of indicating what he had deciphered for himself.

Shelton’s Tachygraphy works a bit like an abugida (a term sometimes used for writing systems like Devanagari, used for Sanskrit). It does have individual signs for both consonants and vowels, but when writing a sequence of vowel + consonant you combine the two into a unit in some way; when writing a medial vowel, however, you can do this using only the relative position of two consonant signs, without using a special sign for the vowel at all (see the example below). So in a sense the consonants take precedence, but vowels are nevertheless quite clearly indicated.

So how do you crack a code like this? Well one thing that aided Smith was finding a passage in the diary of which Pepys had written a separate version somewhere else, in longhand. A bit like in a bilingual inscription, this allowed comparison of one version with the other and helped Smith to unravel the puzzle. But Pepys had made the decipherment more difficult by mixing his code: most of the diary is written in the shorthand system, but a lot of names and places are written in longhand, in the middle of shorthand sections – as you can see in this photo of a page from the diary. 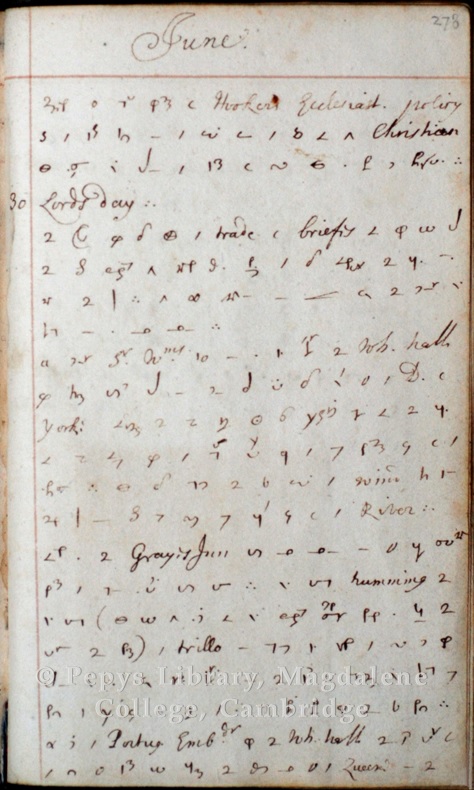 A page from Pepys’ diary, recording the events of 30th June 1661. By permission of the Pepys Library, Magdalene College, Cambridge.

In the quest to decipher a writing system, the presence of proper names often provides a very important key. Egyptian Hieroglyphs (on which see further Rob’s earlier post) are a good example, because it was the identification of particular names (most famously Ptolemy and Cleopatra) by Thomas Young and Jean-François Champollion that helped to unlock the rest of the puzzle. 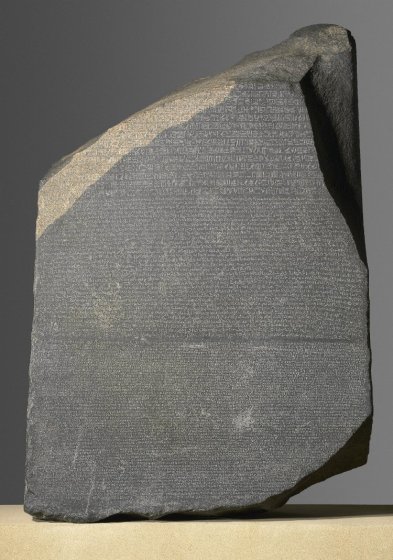 The Rosetta Stone. Trustees of the British Museum.

In my own research too I have found the presence of proper names in inscriptions an invaluable aid in trying to understand an unknown language or undeciphered writing system. In ancient Cyprus, for example, the Cypriot Syllabic script (deciphered in the 19th century by George Smith, with the aid of a bilingual inscription) was used during the first millennium BC not only for Greek but also for a language that we know very little about, labelled by us ‘Eteocypriot’ – something I worked on at length during my doctorate and after. What we know about Eteocypriot is largely gleaned from being able to recognise some Greek names in the middle of otherwise obscure inscriptions.

The Amathus Bilingual, with Eteocypriot above and Greek below (the honorand’s name, Ariston, is highlighted in both). Drawing after O. Masson (ICS 196).

Moving to Bronze Age Crete, one of the reasons we can assume Linear A had similar sign values to Linear B is that we find some names, especially place names, that are spelt the same in both writing systems – for example Phaistos, spelt pa-i-to using the same signs in both Linear A and Linear B. In this way, the reading of a proper name can provide a very important way of checking the values you are supplying as you attempt to decipher a script or code.

In fact, when cuneiform (the wedge-shaped usually syllabic writing systems of the ancient Near East) was deciphered, the difficulty in recognising proper names at first proved very challenging. If the decipherers were correct about the values of the signs, why could they not identify names of people or places that could be verified independently using other historical sources? Just like Pepys, the cuneiform system itself had laid a trap here. One of the key features of most cuneiform writing is that a single word can be spelt in more than one way, which meant that any given name could appear in several different configurations with combinations of syllabograms and logograms – and in turn this made it difficult to identify such names. Once this was recognised, it was possible to be more certain about the validity of the decipherment. 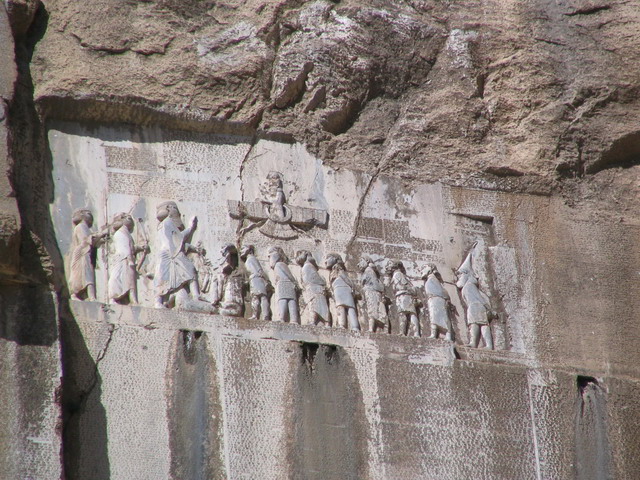 The Bisitun Inscription, one of the texts that was used in the decipherment of cuneiform.

So this tour of the Pepys Library provided me with all sorts of food for thought, and I am very glad that I went along. The shorthand Pepys used might not quite be an ancient writing system, but decoding it follows the same principles as any decipherment (well, unless you realise that the key to the code is in a book on a nearby shelf, as John Smith eventually did!). In fact, the similarities between decipherment of ancient scripts and decoding ciphers form the theme of a new exhibition at the Fitzwilliam Museum in Cambridge, Codebreakers and Groundbreakers, opening tomorrow – keep an eye on the blog for more about this in the near future. And when you try to read an inscription or code, look out for proper names because they just might display some special properties that help (or hinder) you in your decipherment attempts.

With warmest thanks to my colleagues at Magdalene College for helping me with the material for this blog post.

3 thoughts on “What’s in a name? Samuel Pepys and the problems of decipherment”