For this post I wanted to focus on just one inscription, and say a little about how it plays into some of the themes I have been highlighting in previous posts – especially how its social context helps us to understand it as an object.

The inscription is on a ceramic vessel in the shape of a cockerel, made from a black glazed ware known as bucchero. This type of pottery is typical of ancient Etruria, an area of Italy to the north of Rome where the now little-understood language Etruscan was spoken. Incised around the body of the vessel is an abecedarium, listing the signs of the alphabet in A,B,C order.

Bucchero vessel in the shape of a cockerel. The Metropolitan Museum of Art, Fletcher Fund, 1924. http://www.metmuseum.org/art/collection/search/251482.

The cockerel dates from the 7th century BC, making it both an early example of bucchero ware and quite an early example of alphabetic writing in Italy. An astonishing variety of different shapes of vessel were produced in bucchero ware, ranging from more normal-looking bowls and pots of various kinds, to more adventurous items in the shape of animals and human figures. Many items made from bucchero ware were decorative drinking vessels associated with feasting, including some that imitated vessels usually made out of metals such as gold, silver and bronze. The shapes of bucchero ware vessels were very often inspired by the sorts of vessels in use in feasting contexts in the eastern Mediterranean, for example in Greece.

If you want to read more about bucchero ware, I would recommend a British Museum publication, illustrated with a wealth of objects from its own collection, which you can access freely HERE.

It is important to note that bucchero ware was not the sort of tableware you would use every day. These were high status ceramics, produced by a labour-intensive process that would have required a high degree of skill, and we might suspect that they would not have been cheap. Their place in society is one of ‘elite’ consumption: high quality goods produced for people who could afford them. Influences from vessel types in use for feasting abroad would presumably have added to their appeal, showing connections with elite behaviour across the Mediterranean. 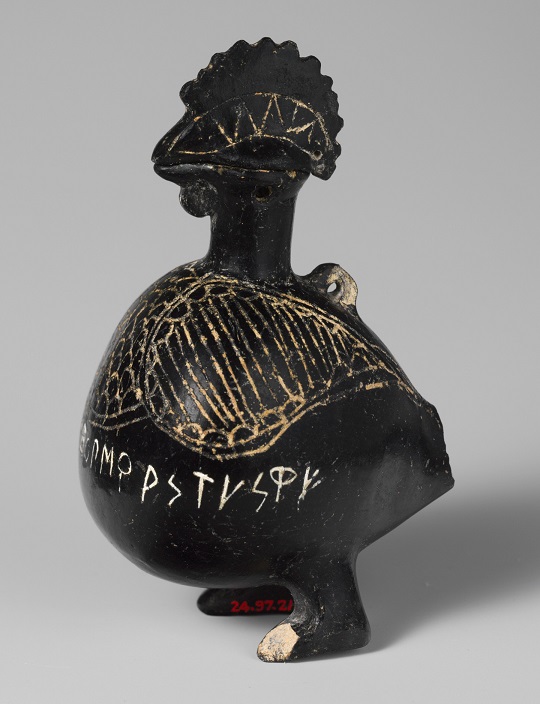 Bucchero vessel in the shape of a cockerel: other side. The Metropolitan Museum of Art, Fletcher Fund, 1924. http://www.metmuseum.org/art/collection/search/251482.

This object is particularly playful, a rather lifelike depiction of a cockerel that would have been used as some sort of vessel with a lid (you can see in the image where it opens at the top). It has been suggested that it might have been an inkwell, making its usage and the abecedarium inscribed on the outside fit in with each other: if this is the case, we would be dealing with a very decorative piece of writing paraphernalia.

The abecedarium makes another sort of international link obvious, namely the close connection between the alphabet used in Etruria and that used in Greece. Indeed, you could be forgiven for thinking that this simply is the Greek alphabet being used by people in a different part of the Mediterranean. In many ways, this may be a good way of thinking about the spread of the alphabet – but this is a much bigger topic and one that we will have to save for future posts.

Abecedarium from the bucchero vessel in the shape of a cockerel. The Metropolitan Museum of Art, Fletcher Fund, 1924. http://www.metmuseum.org/art/collection/search/251482.

Whatever the cockerel was used for, the appearance of the abecedarium around its body tells us something about literacy. There can be no doubt that the inscription is part of the object’s decoration, made to fit in with the stylised plumage drawn above it. Using an abecedarium is in a way symbolic of the act and knowledge of writing, showing the signs in the order in which they would be learnt. In the context of the object’s use as a high status vessel by elites, this shows a certain pride in literacy – people in the upper echelons of society were clearly keen to show they knew about writing. And as we will no doubt see in the future, this was a trend by no means limited to ancient Etruria.

There is just one flaw in the display of literacy in this particular object, and that is an apparent ‘mistake’ in the abecedarium. Near the end of the sequence, it looks as though the letter S (in an angular shape like a lightning bolt) has been written twice, once before T (where we would expect it) and then again after V (where we might expect X to appear in an alphabet from this area). Inaccuracies like these are also not uncommon in ancient alphabetic texts, especially in the earlier stages of alphabetic literacy – and indeed the fact that many abecedarium inscriptions are only partial, giving just the first few letters, might suggest that the beginning of the alphabet was easier to remember than the end!

I hope you enjoyed looking at this really rather wonderful object. It is one of my favourite inscribed curios – well, one of many, as you will see as time goes on! Tune in next time for more tales of writing from ancient world…

One thought on “Inscription Spotlight: An Etruscan Cockerel”